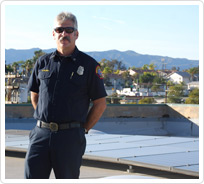 “This project was done in a revenue neutral capacity for the district. It didn’t cost our tax payers a dime.”

Fire District Installs Solar at No Cost to Tax Payers 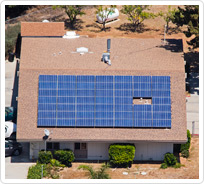 A special district, the North County Fire Protection District (NCFPD) is funded by property taxes, and when the 2008 recession hit and property values decreased significantly, its budget began shrinking. In 2013, NCFPD was tasked to cut operating costs in order to avoid personnel layoffs and service reductions to the communities of Fallbrook, Bonsall and Rainbow.

In examining expenditures, an item that stuck out was energy, with San Diego Gas & Electric (SDG&E) bills running nearly $60,000 a year to operate six fire stations, an administrative headquarters and a fleet maintenance building. Greg Wilson, a NCFPD battalion chief, thought a solar electric system on each facility would lower utility costs, and he began exploring the possibilities. 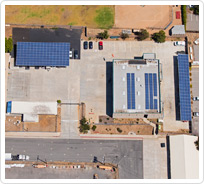 Wilson researched a variety of financing options, from private equity loans to power purchase agreements, but he determined none of them penciled out to real savings. Then he discovered the California Energy Commission’s Energy Conservation Assistance Act (ECAA) low interest loan program.

The ECAA low interest loan is available for energy efficiency and energy generation projects completed by California municipalities, public schools and special districts. The loan terms are based on the project’s projected annual energy cost savings plus 1% interest.

A feasibility study showed that five solar photovoltaic (PV) systems could save the fire district nearly $50,000 annually in energy costs and that they could pay off the loan in 10-12 years. Under the ECAA loan program, the District is able to service the debt on the loan for less than the cost of the utility-based energy savings. NCFPD realized immediate energy cost savings from Day-1. 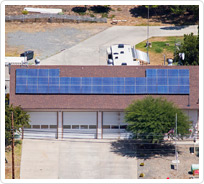 In July 2014, NCFPD decided to pursue installing solar on four fire stations and their fleet maintenance facility building, with some special considerations. For carport installations, an 11-foot vertical clearance was required for fire trucks; installations could not interfere with emergency backup generator systems; and construction and equipment drop offs needed to be carefully coordinated, as the stations never close.

As a public entity, NCFPD was conscious about the cost of the project, and selected the qualified bidder with the lowest cost per watt. Sullivan Solar Power won the contract at $4 per watt. The solar installations were completed within three to eight months.

The project comprised three rooftop installations and two solar carports that totaled 124.4 kW of solar capacity. It qualified for a California Solar Initiative rebate and assistance from CSE’s solar team.

Greater savings were realized by enrolling Fire Station 1 in Fallbrook, Calif., in SDG&E’s newly enacted Net Energy Metering Aggregation program, in lieu of the standard net energy metering program. Through aggregation, the fire district is able to share the solar generation at Station 1 with three other facility meters located on adjacent NCFPD properties.

Determined to cut their energy costs even further after installing solar, NCFPD enrolled in SDG&E’s Direct Install Program. Through the program, NCFPD was able at no cost to replace all of their lighting with LED fixtures and lamps, service all HVAC systems and install occupancy sensors to control lighting.

Not only was this project completed at no cost to the fire district’s property tax payers, it also will lower ongoing operating costs and provide environmental benefits for decades to come. In the first year of operation, NCFPD’s solar installations generated over 200,000 kWh exceeding pre-construction estimates.

The District has already begun its second solar project with ECAA Low Interest financing. Fire Station 5 in Bonsall was under construction during the first round of solar installations. NCFPD has again contracted with Sullivan Solar Power to install 54,000 watts of PV in a combination of roof top and carport mounted solar arrays offsetting an additional 90,640 kWh of annual utility based energy consumption.

“No other Fire district in Southern California has done this, and it wouldn’t have been possible without the support of our board.”
- Greg Wilson, NCFPD